Below are my scores in PDF format 点擊以下藍框形象看樂譜

This was commissioned by Lucy Cartledge and Nicholas Hooper to be played at the Edinburgh Fringe Festival. I needed to submit a title before I had even written the piece for the festival programme. As Nicholas was practicing this martial art, I jokingly called it Tai-Chi. Though my cat Mao-Mao did not like this piece, Lucy and Nick liked the piece and have performed it at many venues. Later one of my cancer consultants, Dr. David Tong of Guy's & St Thomas', wrote a poem for this music. In this recording the poem is narrated by Jane Webster before the music.

The music reflects the movement of this martial art, and also Yin and Yan opposing and complementing each other. 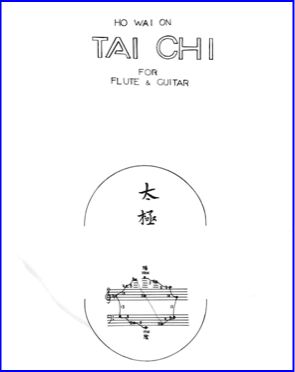 WISDOM AND LOVE for voice and guitar